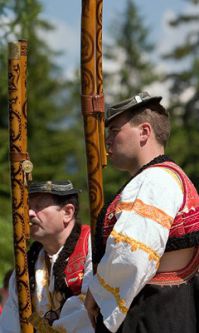 Wooden folk musical instrument ´´Fujara´´
The oldest reports of fujara are probably already from the 10th century by the Arab writers Roste and Kardis. The roots of the fujara need to be further explored in the process of creating families of woodwind instruments at the end of the 15th and early 16th centuries. In the process of transforming from an angular form to today's, its particular creator is not known. Currently it is very famous in Slovenská Ľupča, in Central Slovakia. However, several sources state that Podpoľanie, Northern part of mountain area, is its home.
"Fujara" is a very large tonal bass flute with 3 holes at the bottom. It has unique musical and acoustic elements. Its tube generally has a length of 160 to 200 cm and is complemented by a shorter tube with a length of 40-80 cm, which serves as a channel that directs the air flow to the edge of its own bass flute. In the past, the fujara was a tool of shepherds, and its sound was to calm down the sheep to graze better.
Country:  Slovakia
[ + info ]

Zlobcoki is an instrument with a very resonant sound, used in Carpathian Area (Podhale) before the spread of the violin; currently resumed in the folklore movement. Zlobcoki are hand made from wood and metal.
The films describes the history of described instruments - Zlobcoki, and gives the opportunity to listen to their sound in traditional folk music from the region of its origin – Carpathian Area (Podhale) in Poland.

The films describes and shows  the technique used to make the traditional instrument - Zlobcoki,

A folk instrument from Poland - Bagpipe

Bagpipe called Dudy in Polish, is a woodwind musical instrument from the group of reed aerophones. They form a traditional band preserved to our times in the south-western part of Wielkopolska Area in Poland.

The film describes and demonstrates the instrument as well as the technique of making the instrument - Podhale Bagpipe . Thanks to the recording, you can also listen to their sound performed by folk artists.

- The item represented is a pair of castanets.
- There is a typical technique in creating traditional Spanish Castanets.
- Main material used is wood, and in particular hardwood from chestnut.
- The geographical area of this craft item is actually the whole Spain.
This short video shows an example of castanets creation.
Country:  Spain
[ + info ]

At a young age he left for Paris to play guitar. Carlos González made his living playing on the metro, until his passion for classical music lead to him wanting a lute. As he didn’t have much money, he signed up for a studio and created his own instrument. This move changed his life and his career as a guitar player was cast aside.
In the nineties he settled in Almeria and since then, he has sold his instruments from this part of Andalusia to the world. If he doesn’t know the instrument, he studies it, makes plans and then builds it.
A hard task driven by his passion: transforming a piece of wood until he discovers its musical soul. His most prestigious recognition, the Card of Master Craftsman from the Regional Government of Andalusia and the Order of Gentlemen of Arts and Culture from the Ministry of French Culture.
Country:  Spain/Andalusia/Almería
[ + info ] 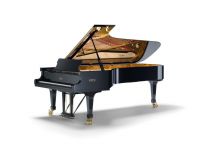 Fazioli promo: Inside a Dream

This video shows the ability of the piano artisans by the Fazioli Industry, based in Veneto, Italy. Every piano is handmade and require more than 30 months of work to be completed. The video shows the entire process of work, from the assembly of different pieces to the final step of painting and polishing the wood. 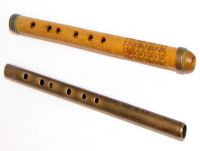 The whistle is a musical instrument made of wood. All types of whistles have the shape of a cylindrical tube, with or without holes.

The first whistle discovered on the territory of Romania, in Moldova, dates back 20,000 years ago.

In the last century, many inhabitants from the villages of Zarand Country (Arad, Alba and Hunedoara counties) were specializing in various crafts, including whistles.

Today there are very few whistle craftsmen who have inherited the father-to-son craftsmanship.

In this video, the last whistle master from the Dumbrava de Sus village, Ribita commune, shows us how to prepare and manufactured a whistle. He chooses the wood from the surrounding hills and can be of cherry tree plum tree, ash, hazelnut or willow.

The tulnic is a archaic musical instrument used in Apuseni Mountains for calls to battle, it signaled fires or it simply played for cheer. The years passed by, the history changed and the tulnic, just like so many other objects in the rural household has lost its functionality.

Today, those who can still pass on the secret of making tulnics to future generations are very few. Those who know how to make them “sing” are also very few and they are generally women.

The wood from which the instrument is made is called "fulgeris", a kind of spruce grown on mountains with a fiber structure that allows for easy modeling.

The first step in making the tulnik consists  of cleaning and longitudinally cutting from large diameters to small, in a prism shape, then dried at room temperature, away from the sun. Further, the wood is brought to the external form of the tulnic that we see, with the help of a iron tool and the last part of the process is the one where the juniper canes are used to tie the tulnic and then it can be decorated.

The video shows the manufacturing of a drum. The artisan works first the external structure of the drum, giving the right shape. Then, he uses the cords to tie the internal part of the drum. 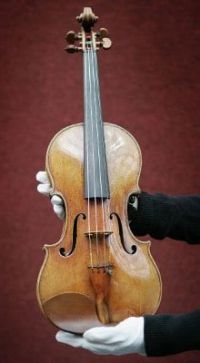 Manufacturing of the violin "il cremonese" by Stefano Marzi

The video shows the ancient art of lutist. The violin is made with spruce wood which is considered the best one for instruments. The maple wood is used for the handle and the bottom. For other parts of the violin, the artisans use willow wood or ebony. The wood is worked with great ability and finally inlaid. The final step consists in the painting and polishing of the instrument. 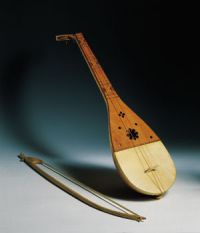 The ‘rabel’ is a stringed instrument similar to the violin, with a variable number of strings, between 1 and 5. The sound is obtained by rubbing the strings with a bow while the instrument rests on the shoulder-chest, on the side, on the thigh of one leg or between the two legs. It can be played standing or sitting.

It was introduced into the Iberian Peninsula by the Arabs, extending and reaching its peak of popularity during the Middle Ages and the Renaissance, used by both troubadours and minstrels.

In its artisan construction, a piece of hollowed wood is used in customized ways to take different forms. There is no unique pattern. Usually it is made with more than one piece.

The main material used to make it is wood. Depending on the area, other materials are used for the covers, such as skins, tin or the wood itself. For the strings of the ‘rabel’, some animal guts can be used although today there are metallic strings that provide better sound and easier tuning. For the bow, a rod is traditionally sought, which can be bent, and for the ropes, horse hair is used. Currently, the mane can be replaced by very fine nylon that, once curled, makes very good rubbing.

- The items represented are classic guitars.
- The technique is a typical technique of crafting classic Spanish flamenco guitars.
- The main material is wood. Usually the type of wood used is rosewood, maple, koa, satinwood and caviuna and others.
Two video are linked below. One shows how a typical flamenco guitar is made and the second one shows the steps to create a classic guitar.

Daniel Gil de Avalle's workshop specializes in the construction, assembly, maintenance, restoration and collection of stringed and plucked string instruments, located in an extraordinary setting: the heart of the historic Jewish quarter of Granada, the Realejo. Through the recovery and restoration of historical string instruments, the lutier Daniel Gil de Avalle contributes to the study and recovery of Spanish heritage and culture.

The process of construction of professional Spanish guitars and concert begins with the selection of high quality wood from different parts of the world: Palo Santo, Madagascar, Cypress, Fir, Cedar, Ebony, Maple, etc. The wood dries naturally between 10 and 30 years according to the model of the guitar, to ensure the maximum harmonic splendor of the guitar. During the construction process of these Spanish guitars, natural tails are used to provide the instrument with the necessary closing and tension. The guitar is varnished by hand, using Goma Laca so that the guitars acquire the maximum response given the elasticity of this varnish. 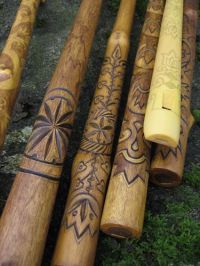 The period of origin goes back to 14-17. century, but currently the manufacture of it is typical near the river Morava. The inventor is not known, because the shape and functionality changed by the development of this musical instrument.

´´Koncovka´´ is a typical Slovak folk instrument, which is created by wood carving and its production is mainly done from the elder wood. It is a whistle without the tone holes, traditionally played by shepherds with closing and opening the bottom of the groove. By increasing the air speed, two different harmonics can be played. Traditional melodies of the selected one are used by partial Lydian scale, which is available on this device.
Country:  Slovakia
[ + info ] 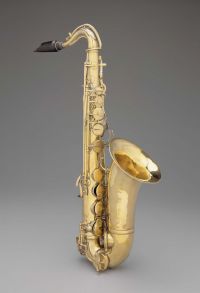 Inside a Belgian Saxophones Factory, the video shows the manufacturing of saxophones. The saxophone was invented by the Belgian Adolphe Sax, from which the instrument took its name. The material used for the cladding of the saxophone is the brass. The saxophone is finally decorated and polished. 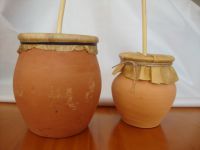 The zambomba is a musical instrument of friction.  It consists of a hollow cylinder that can be of different materials (ceramic, cooked clay, wood, etc.) with one end closed with a patch, which is traversed through the centre with a rod made of wood or other materials. By rubbing the rod with both hands, the vibration produced is transmitted to the leather, producing a serious and peculiar sound.

The manufacturing process involves different artisans, such as potter, skinner and ‘zambombero’, who is to articulate the activity between them: he orders the potter in advance the pieces of clay, and buy the already dry skins from the skinner. The reeds for the rod are picked up directly in damp places. The ‘zambombero’ mounts all the pieces and tunes the instrument.

Its origin is in the flamenco neighbourhood parties that took place in Jerez, to accompany flamenco singing ‘cantes’. It was later enriched stylistically and musically in the following century, coinciding with the incorporation of the Andalusian carols ’villancicos’ to the flamenco repertoire.